Autoradiography involves localization, recording of a radiolabel within a solid specimen, and production of image in a photographic emulsion. These photographic emulsions consist of silver halide crystals suspended in a clear phase composed mainly of gelatin. In 1867, first autoradiography was obtained accidentally, when a blackening was produced on emulsions of silver chloride and iodide by the uranium salts.

When a β particle or γ-ray from a radionuclide passes through the emulsion, the silver ions are converted to silver atoms. This results in the production of latent image, which is later converted to a visible image after development. During this development (amplification), silver atoms cause entire silver halide crystal to be reduced to metallic silver. Unexposed crystals are removed by dissolution in fixer gives an autoradiographic image, which represents distribution of radiolabel in original sample. Autoradiography can be broadly classified as direct and indirect autoradiography. An autoradiograph is an image recorded on a photographic film, plate or nuclear emulsion produced by the radiation produced by the specimen. 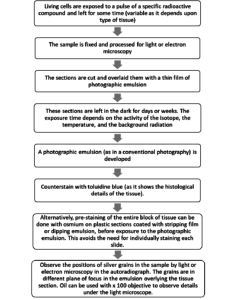 Resolution of activation autoradiography is done by digital computers and several technical means of signals treatments. Analysis of autoradiographic features relates to the elucidation of optical distribution of exposed and treated photo-emulsion used as detector of secondary beta irradiation. It has been used in heart imaging, receptor studies in brain, and for the bone histology.

The autoradiography is used for the detection of the radiolabeled products since the 1950s.

Digital autoradiography is used for the analysis of biological samples and for studying the process of drug metabolism. In recent years, there has been an increasing interest in the use of whole body autoradiography (WBA), to study absorption, distribution, metabolism, and elimination (ADME) of drugs, which is done by image analysis.